All wiring should be installed in accordance with local, state and national electrical code requirements under NEC/ANSI/NFPA 70. IMC threaded conduit, sealed fittings and proper electrical wiring practices should be adhered to. Improper installation can result in fire, serious bodily injury or death.

1) Never smoke or use an open flame anywhere near the tanks or dispensers.
2) All mechanical joints containing fuel products must be sealed with sealant tape appropriate for the product dispensed.
3) Never use any tools near the dispenser or tanks that can create unexpected sparks
4) Always have a fire extinguisher available in case of fire
5) Always turn off all electrical power when working on any pumps or dispensers.

A. Installation – Above Ground Tank

The FluidSecure unit is designed to work with virtually any electrically operated dispenser, pump, or solenoid. There are a large variety of dispensing systems and electrical connections and methods of connecting such devices together. It is not the intention of this manual to cover all possible combinations of connections.
This manual will cover a “typical” installation however the installer should be sufficiently proficient in all aspects of dispensing systems to be able to understand how a FluidSecure should be installed and to make
sound judgments on how to modify a typical installation to suit the needs for any configuration that may and will be different from a typical one explained here. 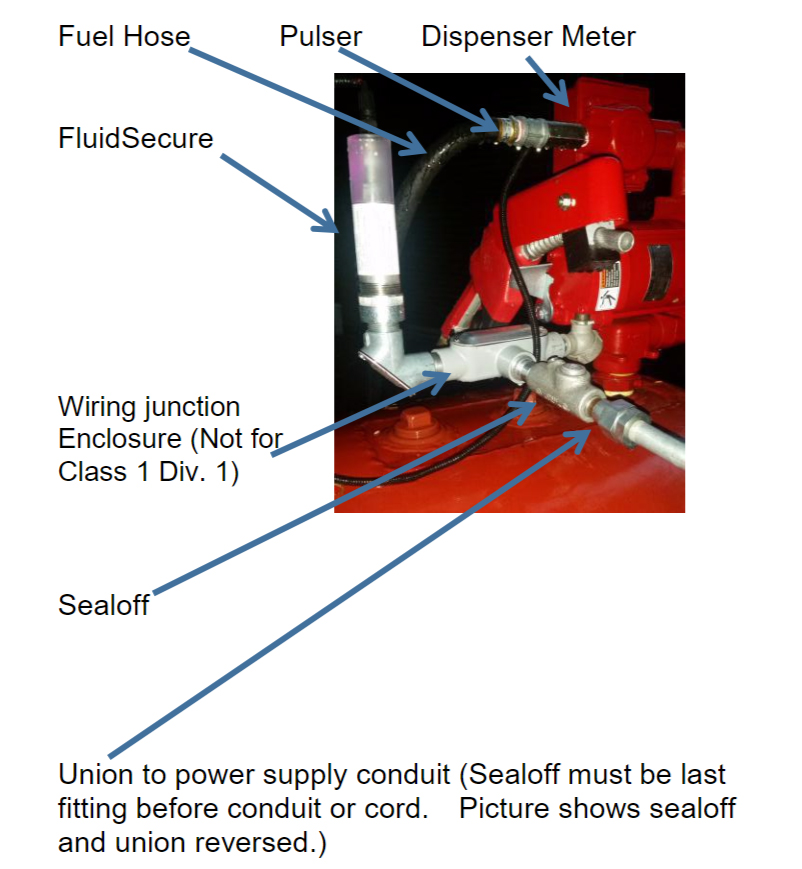 The FluidSecure kit contains the conduit fittings, bodies and connectors to install the FluidSecure unit into a typical dispenser/pump. A typical installation for an above ground tank will look similar to this picture. 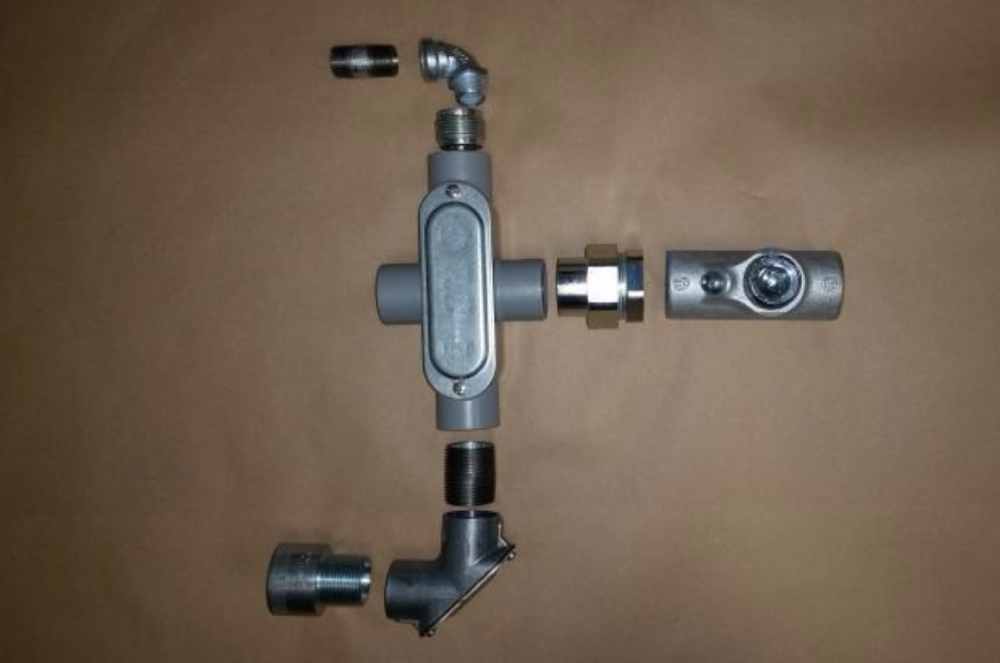 This picture shows the parts that are included with a FluidSecure kit.

The installation typically involves disconnecting the AC power supply wring (generally that comes from a nearby building or power source) from the dispenser and re-routing it through the supplied conduit parts that are supplied as part of the kit and re-connecting the wires to the FluidSecure unit and dispenser. See alternate connections for DC hookup. 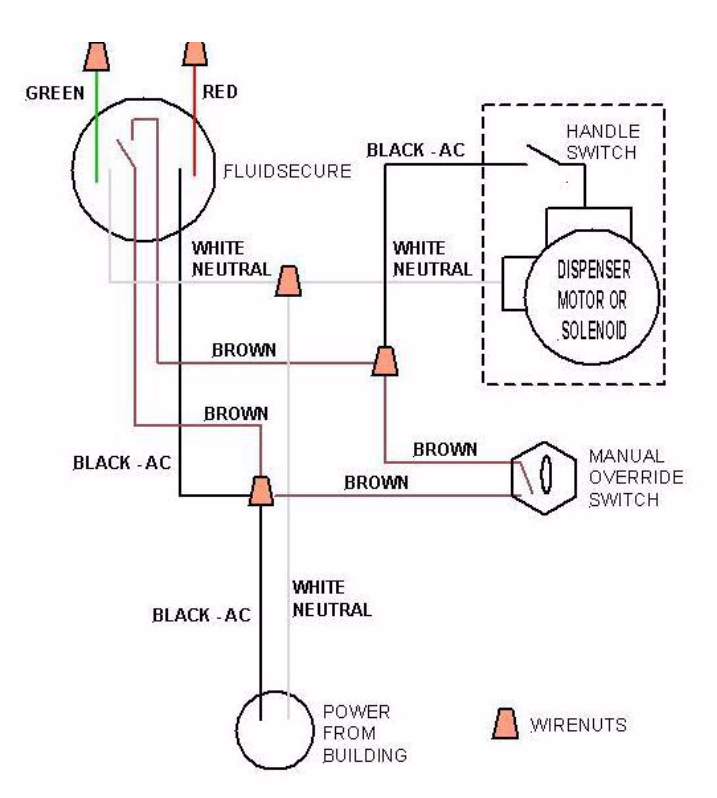 The pulser is installed between the pump and the hose. This will involve removing the hose. This guide shows one of several pulser types that may be supplied with the system. Regardless of the configuration, each pulser is marked with an arrow showing the direction of fluid flow. Please note that the included pulsers are shipped with pre-installed adapters that convert the G type thread into a 3/4” NPT female opening. The adapters are O-ring protected into the pulser. Please ensure that the adapters are secure but do not over tighten. Install with the arrow pointing towards the hose.

Removal of the hose will result in a minor amount of fuel spillage. This can result in a fire hazard and must be handled with extreme care.

Empty as much fuel from the hose as possible before removing. Hold the end of the hose high once removed until it can be placed in the recycle container for removal of the remainder of the fuel. Wrap the ends of any adapters in teflon tape. In general you will need a 3/4” adapter to attach the pulser into the dispenser. 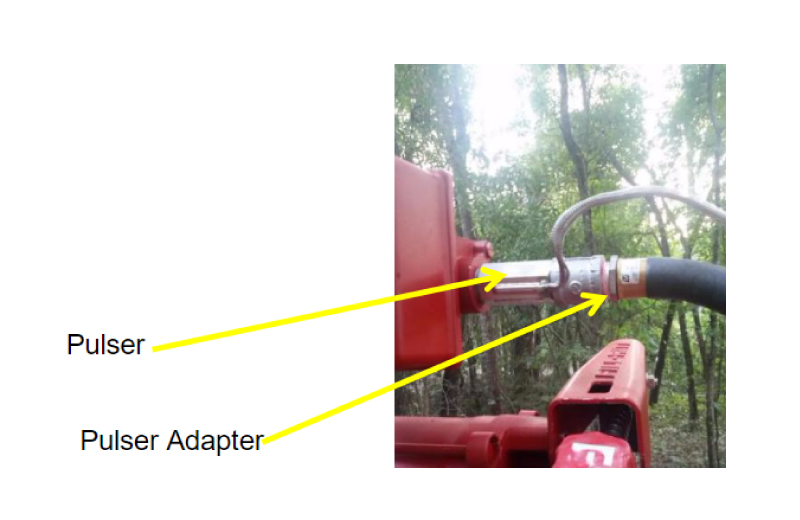 Installation for standard dispensers is quite simple. Most have an explosion proof junction box located in the bottom section of the dispenser. This junction box generally will have two or more conduits that feed into it. Normally there are additional available conduit openings in that junction box. Simply unscrew the cap from one of the unused ports and screw in the FluidSecure unit. If there are no available openings you will have to procure a rated Class 1, Division 1 T box to attach to the junction box and re-route an existing conduit to the box and then attach the FluidSecure unit. Do NOT use the included wiring enclosure as it is not rated for this type area.
The manual override switch can be removed from the wiring enclosure and inserted into an additional conduit opening in the junction box.

Wiring connections are the same as the above ground tanks. However there are many different dispensers and each one will have differences from one manufacturer to another. It is not within the scope of this document to address all possible combinations. In general the FluidSecure unit should control a solenoid valve, dispenser authorization or a small pump motor. Under no condition should a FluidSecure unit control a large submersible pump motor.

The included pulser can be utilized with standard dispensers and is attached in the same manner as the above ground tanks, however many dispensers have included pulsers which can be attached to the FluidSecure. To use an existing pulser you must utilize the cable and connector that is attached to the FluidSecure pulser. Simply cut the cable as close to the included FluidSecure pulser as needed to obtain the length cable required to reach from the FluidSecure unit to the dispenser pulser. The wiring from the FuidSecure unit is rated intrinsically safe and can be safely run without conduit in a Class 1, Division 1 location or any lesser classification.

Do NOT allow it to enter into a box or other device without a sealoff (included in the FluidSecure kit) to prevent the passage of explosive vapors from a rated area to an non rated area. It is not within the scope of this document to cover all possible pulser combinations that exist on standard dispensers. However there are generally two common types that are often used.

1. Reed Switch or microswitch – This is a non powered switch that opens and closes for every tenth of a gallon. Some will count more often and others less but a 1/10 gallon pulse rate is extremely common in the commercial environment. Connect either wire from this type pulser to the red and green wire in the pulser cable.

2. Open Collector – This is a powered pulser and generally requires 5 to 12 volts to operate. In general, you will have to determine which of the pulsers wires is ground and which are the pulse output. Additionally if the pulser requires external excitation, you may have to connect a 5 or 12 volt line to the pulser. The FluidSecure produces a 5 VDC output that can be used to power an open collector circuit. The following diagram shows which of the pulser lines in the FluidSecure pulser cable should be connected to where on the dispenser pulser. It is often necessary to obtain a wiring diagram of the dispenser pulser circuit to make these wiring determinations. 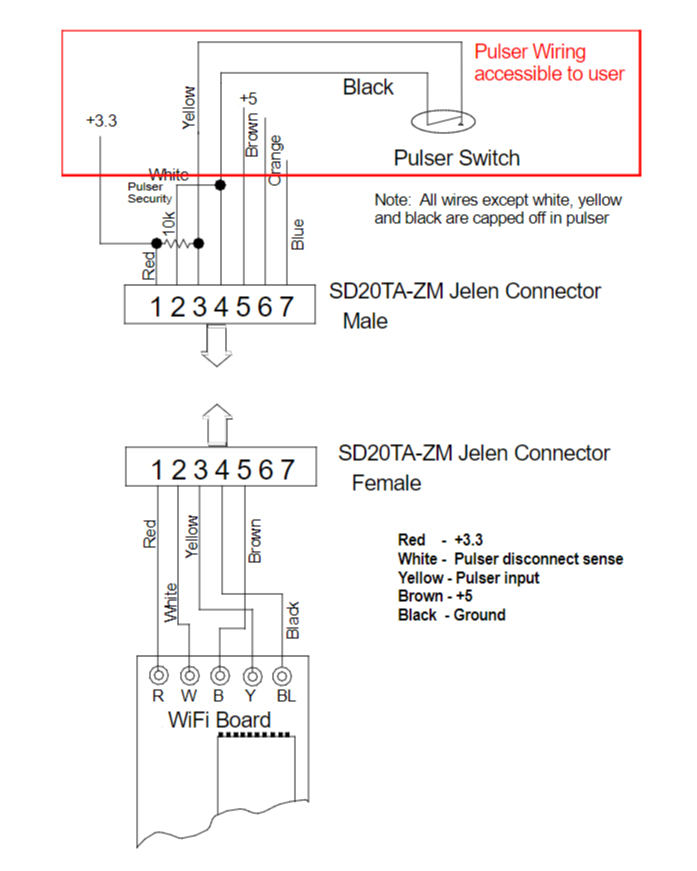 Your physical installation should be complete. Power the dispenser on which in turn will power the FluidSecure. You will notice a faint blue light in the top half of the FluidSecure unit when power is applied. If there is no light, reconfirm that power is present. If no light is observed, recheck your electrical connections and try again. If no light is still not observed, refer to the troubleshooting section using the manual

If you have installed the FluidSecure pulser, it must be calibrated. To calibrate the pulser you must have an authorized cell phone. Contact your FluidSecure administrator to obtain authorization. Once authorized, you will have to either pump fuel into a calibrated container or use the existing meter on your dispenser to calibrate. If you have just installed the included pulser (and you probably have) you must pump at least 20 to 30 gallons back into the tank to purge the air out of the pulser and hose. For calibration, It is best to pump at least 5 gallons for high accuracy but a smaller amount can be utilized. To begin the calibration, refer to your cell phone user guide for the FluidSecure app. Start a transaction and begin pumping into your calibrated container. If you are using your existing meter, then simply pump the fuel back into the tank or into a vehicle. Stop at a full gallon mark as close as you can. It doesn’t matter how many gallons you pump but the more the better. (Please note that we refer to gallons but the label is unimportant. You can use quarts, liters or anything else.) When you are finished, the cell
phone will display a count. Call the administrator and report to them total gallons you pumped and the counts. That is all there is to it.

Once installation is complete you will need to enter some data into the cloud based server web page. Once the system is shipped, a company page will be setup automatically allowing you to start using the software. The cloud based software must be filled out in proper sequence before any testing can be performed and and transactions at the fuel locations can be started. Any users must be authorized and the FluidSecure Links must be initialized. These steps will guide you through the process. Please do them in order so you don’t have to repeat steps.

Enter in a Product Type (Unleaded, Diesel, etc.) and Company from the drop down list.

Enter in Department Number (we suggest you start with 1) and Name. Again, these can be changed later if necessary.

Enter in Fluid Secure Name – start with 1 Enter in Fluid
Secure Current Name – enter in the serial number that is on the FluidSecure unit. The serial number is all alpha characters
Enter in FluidSecure New Name – The name you would like for it to be identified by all users, for example FS-Unleaded
Enter in a Tank Number – start with 1 Enter in the product in the tank from the drop down menu
Select Authorized Fueling Times
Select Authorized Fueling Days
Check Disable Geo Location
Enter in a Pump On Time – usually 30
Enter in a Pump Off Time – usually 30
Select Company from dropdown menu
Enter Original Name of FluidSecure Unit – this is the serial number entered above Enter Units Measured enter 10
Enter Units Measured – enter 3750
Select Time Zone from dropdown menu